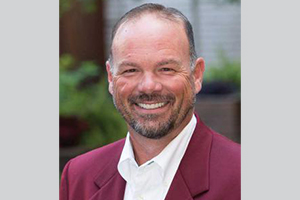 This is the first in a series of interviews with MFG’s valued suppliers.

Lee Staelgraeve is a key account manager for Owens Corning. During his 22 years with OC, he has worked closely with MFG’s senior management and procurement team as well as MFG Research and engineering groups. OC has been honored with MFG’s Supplier of the Year award four times – including 2017.

What does Owens Corning supply to MFG?   Fiber glass reinforcements used in the various molding processes – high pressure, low pressure, open and closed. We supply close to 100% of the reinforcement material that MFG uses.

Commercial fiber glass reinforcements were invented around 1950 – and I believe we started working with MFG around that time.

In 1954 Robert Morrison seized the opportunity to make fiber glass automobile parts for GM’s new Corvette. Our CEO Harold Boeschenstein shared in the excitement of opening up a new, potentially huge, market. OC told Robert that he could count on our support, and we told General Motors that we would have MFG’s back.

What is it like to be a supplier to MFG?  Relationships are built on ups and downs we’ve weathered those together for 65 plus years. When you look at all that these two companies have gone through, a tremendous amount of trust has been built.

When someone from MFG calls with an issue – everyone on our side understands that it’s real. In turn, when we encounter challenges – maybe a need to cover some inflation or cost increases, we can openly discuss the issues.

“From a business perspective, OC sees MFG as an industry trailblazer. And I think they look at us as a supplier they can count on.”

This partnership goes beyond selling fiber glass. As a $7 billion company, we have the scale and resources to do things that are helpful to MFG. For instance, we can provide testing resources for advancing new applications and processes.

If MFG has a challenging question – we may have crossed that bridge already and be able to provide answers or assistance.nbsp;

For example, both companies have a passion about environmental health and safety. Should a question arise about the safety of a certain material, OC has the resources to pursue and provide answers.

Richard Morrison has carried out what Robert Morrison envisioned as far as treating suppliers as part of their team. And that’s not just words, it’s the actual behavior. It’s the foundation of what makes this relationship so good.