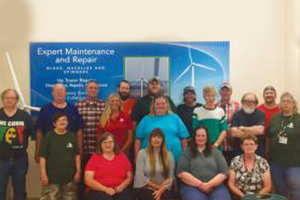 In 2008 the first teammates were hired for a brand new MFG entity built for producing 37 and 40-meter wind turbine blades.

The contributions and loyalty of this “first class” of teammates played a special role in establishing a solid foundation for the company. This talented group of teammates was formally recognized at a company gathering.