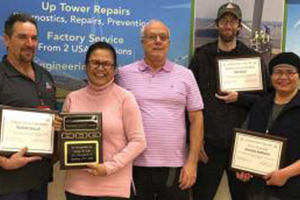 Thanks to her quick-thinking and well-trained teammates, Alma Davis is back on the job at MFG South Dakota after a frightening close call.

Toward the end of her 5:00pm shift, she felt something was wrong when a cough that she’d been nursing got much worse. That’s when she yelled for teammate Annabelle Buffington. “I told her to call ‘SAFETY’ three times, and then I laid down. I remember nothing after that,” Davis said.

Yelling “SAFETY “ three times is an emergency alert for teammates who are trained as Medical Emergency Response Team (MERT) members. By the time teammates Samuel Sletten, Richard Carey II and Armeies Tamayo responded to the call, Davis was unconscious.

“Within minutes, she went unresponsive with no pulse, and the three teammates began performing CPR. An ambulance delivered her to the hospital within 27 minutes of when CPR began”, said Allison Tunheim, human resources manager.

According to Tunheim, doctors told Davis that had the MERT team not taken action, she would not have made it.