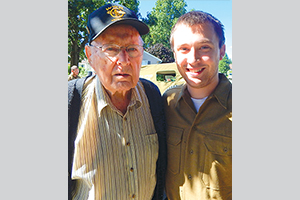 MFG Tray contributed a $1,000 MFG Foundation grant to the Linesville Rotary Club toward the creation of a documentary titled New Boots about 91-year old Charles Rudler of Linesville, PA. The movie depicts the time that Rudler spent imprisoned at a WWII detention camp. Featuring re-enactors from across the state, several scenes were filmed in the Linesville area. MFG Foundation members and Tray teammates attended the premier showing. The film is showing at select venues in the USA.