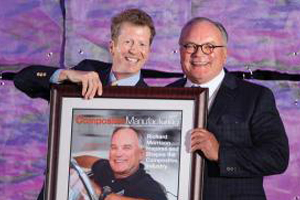 On August 12, Richard Morrison, President/CEO of MFG, was celebrated for 50 years of leadership and service at a gala gathering of 170 industry leaders, colleagues, teammates, and close family at the Spire Institute in Geneva, Ohio.

Tributes and honorary awards were presented to him by composites industry leaders including customers, suppliers and industry associations. Also recognizing him were community and government leaders, acknowledging contributions to Ashtabula County where MFG is headquartered and other communities where MFG has operations.

The highlight of the evening was a beautifully crafted retrospective video that included greetings from teammates at each of the MFG entities and touching stories recounted by some of the longest standing teammates.

Richard joined the company in 1968 after completing an MBA from Stanford University. Prior to being named CEO in November 1987 he held a variety of management roles. During his tenure, MFG has experienced a 10-fold growth in revenue, expanded into many new markets including wind energy, pioneered new composite technologies, and grew its workforce to 2,500 teammates at 13 facilities in North America, including two in Mexico.