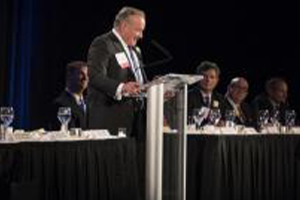 In 1996, Inside Business magazine created the Business Hall of Fame of Cleveland in celebration of the city’s bicentennial. The inaugural class of 100 business leaders included luminaries such as Lorenzo Carter, Cleveland’s first settler; Moses Cleaveland, for whom the city was named; oil tycoon John D. Rockefeller; and industrialist Cyrus Eaton.

Since then, each year a new class of leaders who have helped shape the region’s economic landscape is chosen for induction to what is now known as the Northeast Ohio Business Hall of Fame.

The 2014 class of inductees included Richard Morrison, CEO of MFG, which is headquartered in Ashtabula, OH an hour outside of Cleveland.  Richard joined MFG in 1976 and in 2008 became CEO. During his 38-year tenure, MFG expanded to now include 10 strategically located factories in the USA and Mexico in addition to a dedicated R&D lab, MFG Research, and the company’s engineering services entity, the MFG Design Center.