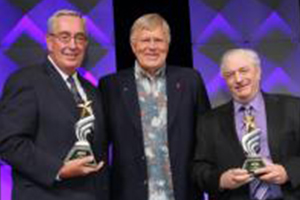 The American Composites Manufacturers Association has chosen MFG’s EVP Dave Denny to receive their prestigious Hall of Fame award for career contributions to the composites industry. He will be officially inducted at the CAMX Conference in October.

For more than 45 years Dave has influenced the manufacturing side of the composites industry. He is a recognized expert in the implementation of world class manufacturing practices, specializing in automotive, truck and wind energy components. His understanding of composites technologies has made him a trusted resource to some of the world’s largest companies including GE Energy, General Motors and Daimler Trucks North America.

In 2012 Dave was honored with the composite industry’s BEST Award for leadership achievements and earlier this year he received MFG’s Pioneer award.

“The ACMA Hall of Fame recognizes the elite performers in our industry. Dave’s contributions in the area of manufacturing excellence have touched companies and individuals around the world,” noted Richard Morrison, CEO of MFG. “We are very pleased to see him honored and grateful for his 19 years of service as a leader, mentor and friend.”